Pioneer on the horizon, entering into a new world!

This time we are stepping on the shores of a new world, Pioneer to be exact. This was requested by you, my dear readers. So of course I will answer the call, and do my best to guide you through this new format. So let's set the anchors, and step into the depths of Pioneer!

Pioneer, what on Earth is that?

Pioneer is a non-rotating format, this means that you can use your cards as long as they are legal in the format. So no rotation happens like in Standard for example.

Currently the following sets are legal in Pioneer:

Any future Standard legal sets will obviously be added to this list, so the card-pool will keep growing as time passes on. Modern supplement sets like Modern Horizons and such are not legal.

While this format doesn't include many of the powerful cards in Modern such as: Lightning Bolt, Path to Exile, Snapcaster Mage or Tarmogoyf. You do have plenty of awesome cards to play with. Few examples are: Deathrite Shaman, Treasure Cruise, Dig Through Time, Jeskai Ascendancy, Siege Rhino and Collected Company. So don't shy away, this format offers plenty of good tools to begin with!

Wizards have announced that for now, they will make a B&R announcement every Monday. This may seem pretty crazy, but I think it's a good way to control the format. Especially now when the format is fairly new, and it's still under works.

Currently the following cards are banned:

The ban-list is fairly small at the moment. But I want to explain the banned cards a bit more in depth.

First of all, fetchlands were the first cards banned. I believe there are few reasons why. Firstly they synergize really well with Delve spells and Deathrite Shaman. And also by keeping the fetchlands away, it keeps Pioneer and Modern in different shapes. Fetchlands have been sort of must plays in formats they are legal. And I like the fact that they chose to do things differently in Pioneer.

Felidar Guardian was one of the first cards to be gone. It's fairly obvious, the Combo of Felidar Guardian + Saheeli Rai to make infinite cats was deemed too good and oppressive.

Field of the Dead had the nickname "Tron of Pioneer", and it kinda is. Land based synergy, which was tough to interact in Pioneer. The ability to keep pumping out zombies just overpowers the fair decks, and there weren't that many ways to deal with the card. Also Scapeshift is in this format, so you can go from 0 to hero with single spell.

Leyline of Abundance/Oath of Nissa/Once upon a Time/Veil Summer. I'll cover these all at once since they kinda were part of the same problem. Green decks. It's that simple. Green devotion decks with Nykthos, Shrine to Nyx to pump out loads of mana. The above cards gave the deck consistency, ability to beat counterspells easily, and super fast starts. Thus the format is better without them, and I believe you can still play ramp with Nykthos, just not as broken anymore.

Smuggler's Copter was the most recent addition to the ban-list. It might not look too broken at first glance. But it's a colorless threat that fit into way too many decks. Especially Mono Black and all Aggro decks just played it, and gave those decks ability to loot and dig for better cards. Basically Copter was just in too many decks, and thus they decided it can't stick around.

Now, the ban-list will most likely see some more cards added to the mix, Wizards will monitor the format very deeply and that is a good thing. As things settle down, the weekly ban updates will most likely go away. So give the format time, I'm sure it will develop beautifully!

I gotta say, Pioneer is still pretty new, so there is plenty of room to explore and try. But I picked some of the coolest decks for you. Hope some of these give you people ideas on what to try!

I got this list from Petr Sochurek, so all the credits goes to him! This deck reminds you from the days of Kaladesh Standard if you remember those times, you won't get caught too off-guard here. Good manabase? Check. Solid curve? Check. Good cards? Check. I recommend this list to anyone who wants to play a grindy, overall good performing deck! You probably don't need Blood Suns anymore, since Field of the Dead is gone.

Now that Once Upon a Time is banned I would replace the three copies with 4th Gilded Goose, 4th Longtusk Cub and a 3rd Glorybringer. The exerting and hasty dragon is very powerful, and by adding the 4th Gilded Goose you maximize your chances to ramp up into it and other spells a turn earlier.

I just had to do this, if you enjoy playing your own game and taking a "decent" amount of time before winning, then this list is for you. Basic idea is to stall the game enough with Fogs and counterspells until you can start looping Nexus of Fates, eventually you will find your 1 copy of Thing in the Ice to kill them. Or, the absolute worst way, deck your opponent. 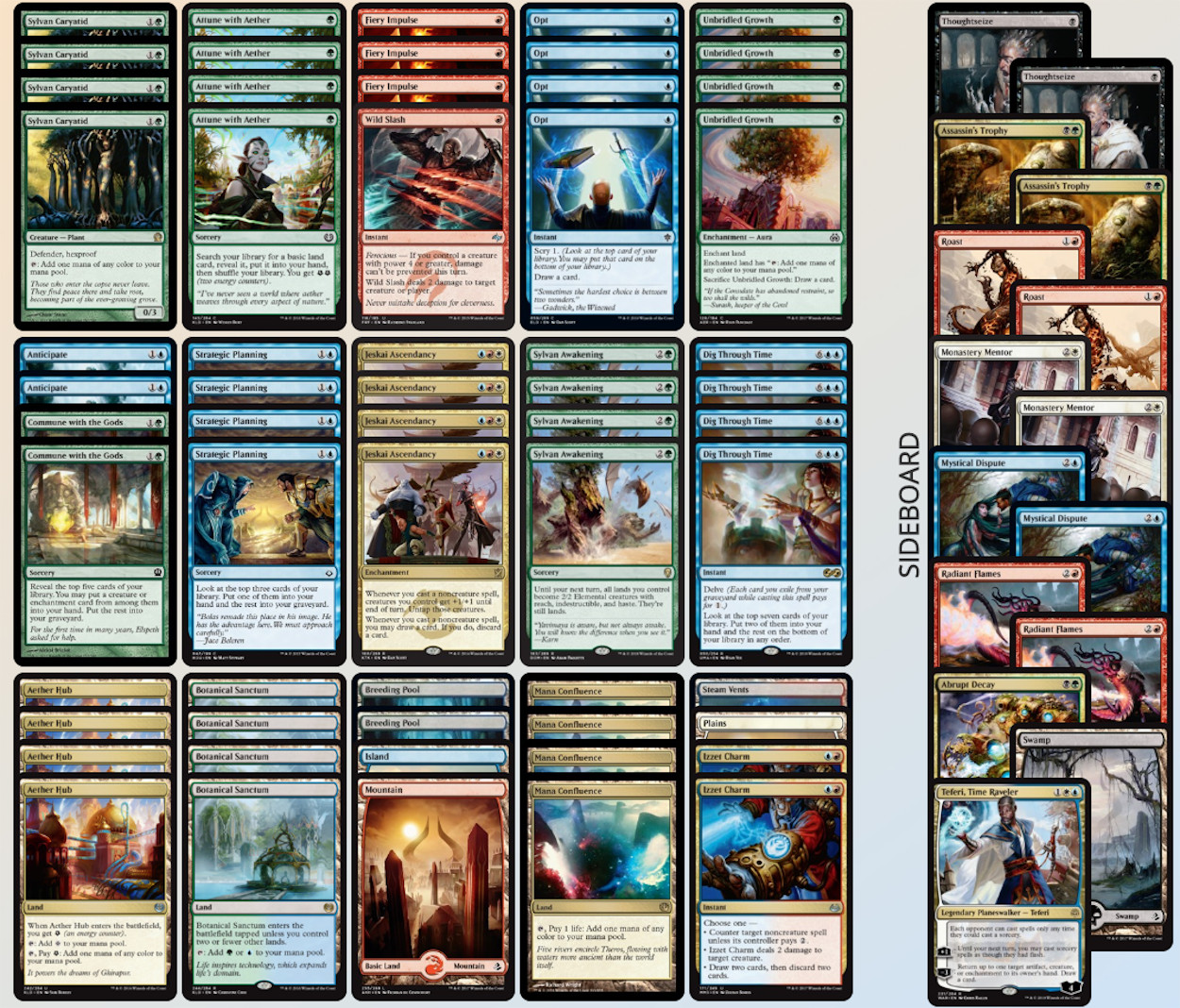 Good old Jeskai Ascendancy, from the days of Khans of Tarkir Standard. The basic idea is to resolve the namesake card, Jeskai Ascendancy with Sylvan Caryatid out. After this you start to draw cards and loot with Ascendancy. You kill with Sylvan Awakening by turning all your lands into gigantic Creatures and attacking with them. This deck was created almost immediately after the format was released and it's really powerful. But after playing with the deck, it really folds to counterspells and Thoughtseize. So I don't think it's unbeatable, but if you're not interacting you will be in trouble.

Cards under the gun

Since the format is very new, the ban-list will most likely get some new additions at some point, here are my personal picks on cards to watch out for:

Those are the cards my eyes are geared towards the most at the moment. But time will tell if any of those cards actually see the ban.

What will the future hold?

Future looks bright for Pioneer, WotC will keep supporting the format widely. So for example there will be MagicFests that hold Pioneer as the main format, also local shops are sure to start featuring it too. Editor's note: You get to play Pioneer starting at 17:00 o'clock every Friday at Poromagia, since it is one of the two Friday Night Magic formats with Booster Draft!

To top it off, the format is very open at the moment, so the options to brew are near limitless! I highly recommend for you to give Pioneer a try, I know I will! (Even though I can't Storm in this format... at least not yet.)

Cheers, and until next time!