Over a thousand convention stands, six giant halls overflowing with tabletop games, a lingering smell of greasy döner and crêpes and two manic Finns with one camera - welcome to our Spiel 2019 travelog!

The Spiel Messe is the biggest board gaming convention globally held every year in the city of Essen, Germany over four days in October. For a board gamer it is an incomparable opportunity to see and try out absolutely everything tabletop games have to offer: new releases, obscure indie games, the biggest hits of the year, accessories of every possible kind and a multitude of gaming related services.

The magnitude of the event is definitely overwhelming, especially for a first time visitor, so if you plan to go (or get inspired to do so by reading this), it is­ wise to make some preparations in advance. Personally, this was my ninth time at the convention, and for my partner in crime Juho, his fifth Essen experience, so by now we had learned to arrive with at least a semblance of a plan to execute and a list of games to try out.

Now, there's nothing particularly wrong with just popping in and hopping from table to table haphazardly, but we wanted to see this year's cream of the crop, and to accomplish that you need to have a list of the hot stuff and where you can find it. Thankfully boardgamegeek.com provides a nifty tool for Spiel every year, which makes it easy to find the titles you want to put your hands on. Equipped with this handy tool and our curated list we dove in head first into the sea of gaming aficionados, dice and meeples.

You can find more photos of this year's Spiel from our Essen Spiel '19 photo album.

For some reason, there is usually one developer or company at Essen who is having a smoking year and is mentioned everywhere. This year was no exception, as Capstone Games had managed to put out two of the hottest titles of the year for Spiel, Maracaibo and Cooper Island. Since Maracaibo was dangling atop the BGG hotness list, it was our first priority to locate the peeps from Capstone. 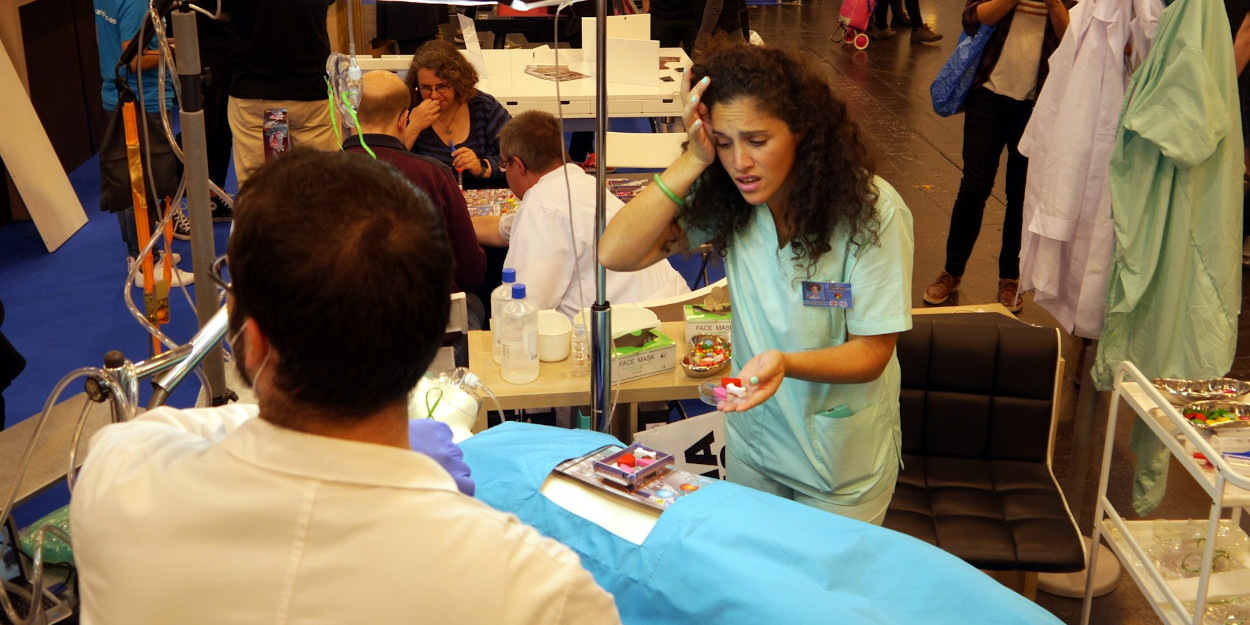 Watching the Rush M.D. demo made the spectator feel like being in the middle of an actual medical operation!

After some initial scouring, featuring an eye-catching stand with an operation table cosplay and a colorful Diablo board game by CGE (eh, I mean Sanctum, we’ll come back to that), we managed to swim through the ocean of people to the Capstone Games booth in hall 2. The demo tables for both of the aforementioned games were unsurprisingly chock-full of people and even the demo reservation lists were devoid of openings. Not to be discouraged, we asked around for the head honcho and got a hold of the founder himself, Mr. Clay Ross, with whom some rapid fire deal-making got underway. 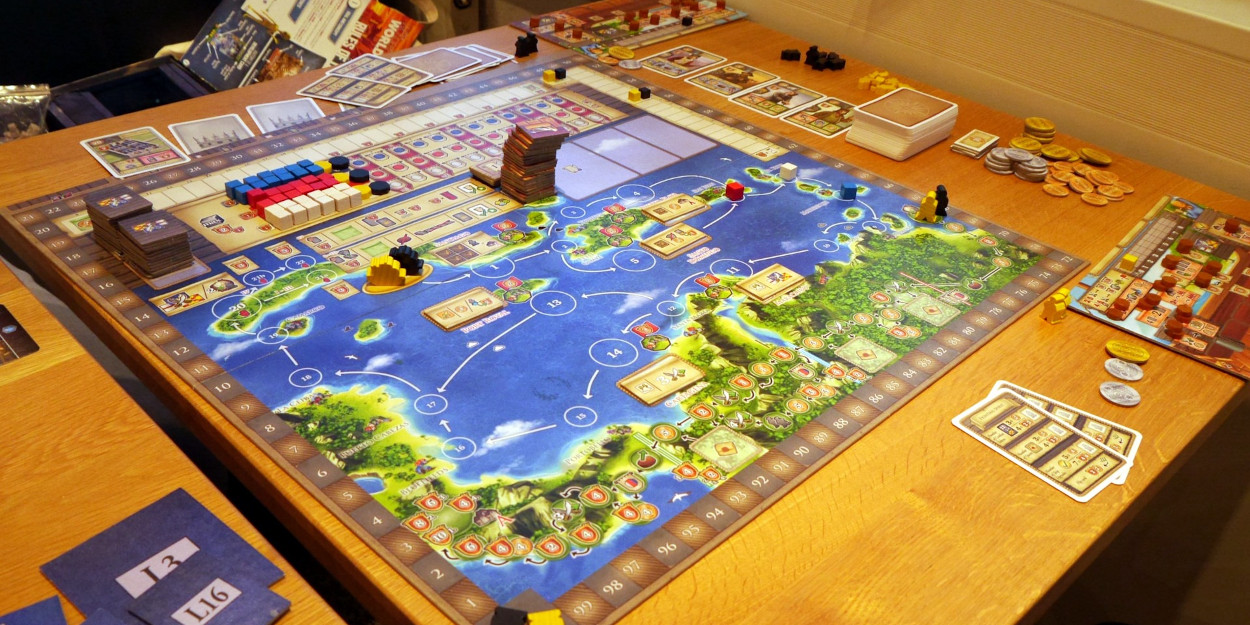 In Maracaibo the players sail around the 17th century Caribbean fulfilling quests, delivering goods and increasing their influence among three different nations.

For a retailer like us there are still some opportunities in Essen to score some loot, even though the companies keep getting bigger and straight deals at the fair are harder to come by. With Capstone we ended up hitting the motherlode, however! We managed to settle on a price for a stack of both Maracaibo and Cooper Island to bring home for you guys, and a beautiful demo copy of Maracaibo to try out for ourselves (also now found in the store gaming library).

While we didn’t get a chance to try out Cooper Island, we heard nothing but good things about the game from people trying it out, and the early ratings and descriptions seem nothing but promising. Also, any game that features a cute dog (Cooper himself) gets my attention every time!

This exciting score got us energized and with the most anticipated games of the fair in our hands, we headed over to the Playmore Games / Dized - booth. The team at Playmore are steadily getting closer to an exciting launch of their Dized app that aims to exterminate dreary rulebooks from the hobby altogether, by replacing them with interactive demos that teach you how to play new games on your mobile device. Their journey has been fascinating to follow, and we always welcome a chance to hear the latest developments of their ambitious project. The guaranteed laughs and strong Finnish coffee always available in their little back room, is undeniably more than a bonus as well, and definitely got us through the long days of Essen! 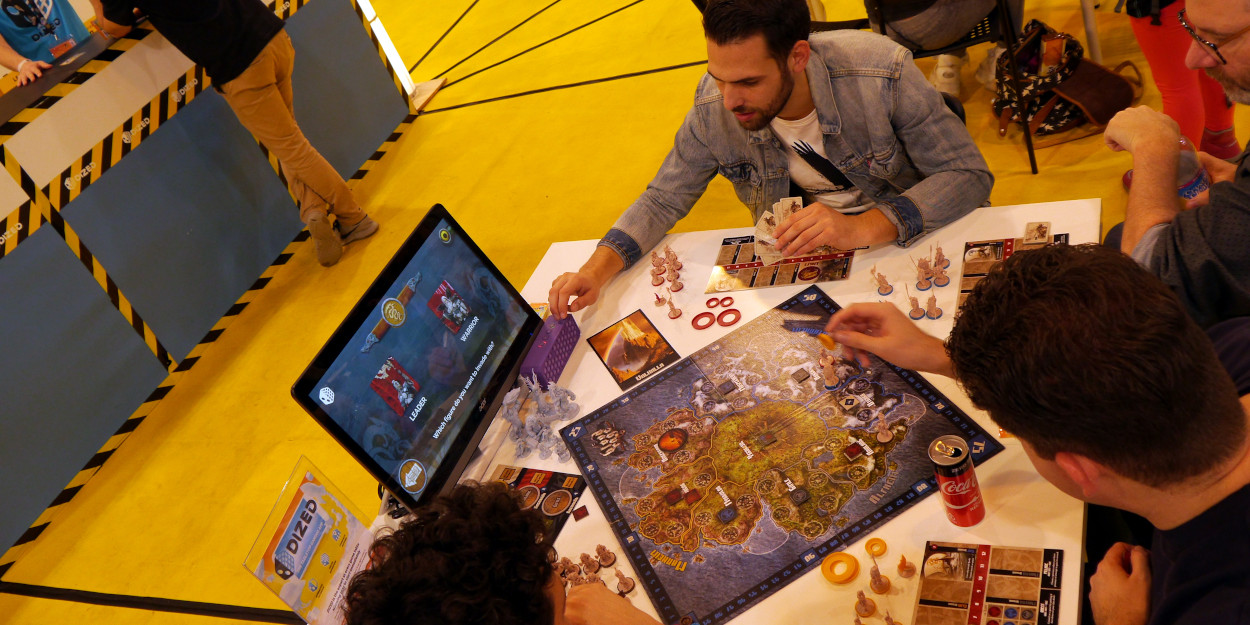 With caffeine coursing through our veins, we figured we’d be up for the challenge when we next headed for the huge Klask stand to try out the new Klask 4, which features a round table and four goals to aim for instead of two. At the big and beautiful demo table we were greeted by Mikkel Bertelsen, the charming designer of Klask who just a couple of months ago provided us with our very own Poromagia Klask table you can try out at our Pasila store. Mikkel challenged us to a game, grabbing two Klask sticks while we only had one each to worry about with Juho. Despite this seemingly large advantage, we were dealt with quickly and effortlessly. Denmark 10 - Finland 1. Clearly we need some time at the practice table still! 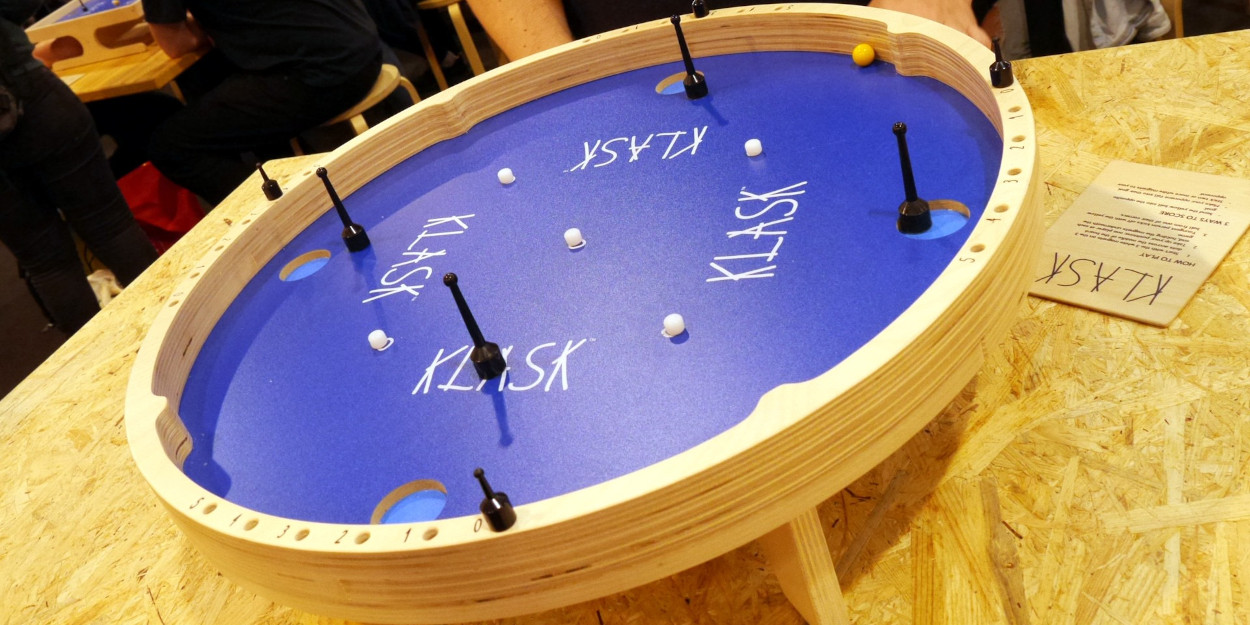 It is absolutely worth mentioning that one of the greatest things about Spiel Essen is the chance to meet the makers and shakers of the industry. For example, having spent countless hours with Through the Ages, Codenames and Mage Knight, it has always been super exciting and fun to meet Vlaada Chvatil at the convention. On the other hand it is also inspiring to meet the up-and-coming designers who are simply brimming with new entrepreneur energy. Getting a chance to both meet and work with these actual people behind the names is essential to every Essen experience for me!

In any case, we would not let our humiliating defeat at the Klask table slow us down, and headed quickly for the Gale Force Nine area featuring one of this year’s most interesting re-releases: Dune (2019 edition). The new edition has stayed quite true to the original, and has kept a graphic style that feels both sleek, yet satisfyingly retro; a style very fitting for the world of Frank Herbert. As an old fan of both the books and the 1993 RTS PC game, I had an unexpected kick of nostalgia watching the demo game unfold. 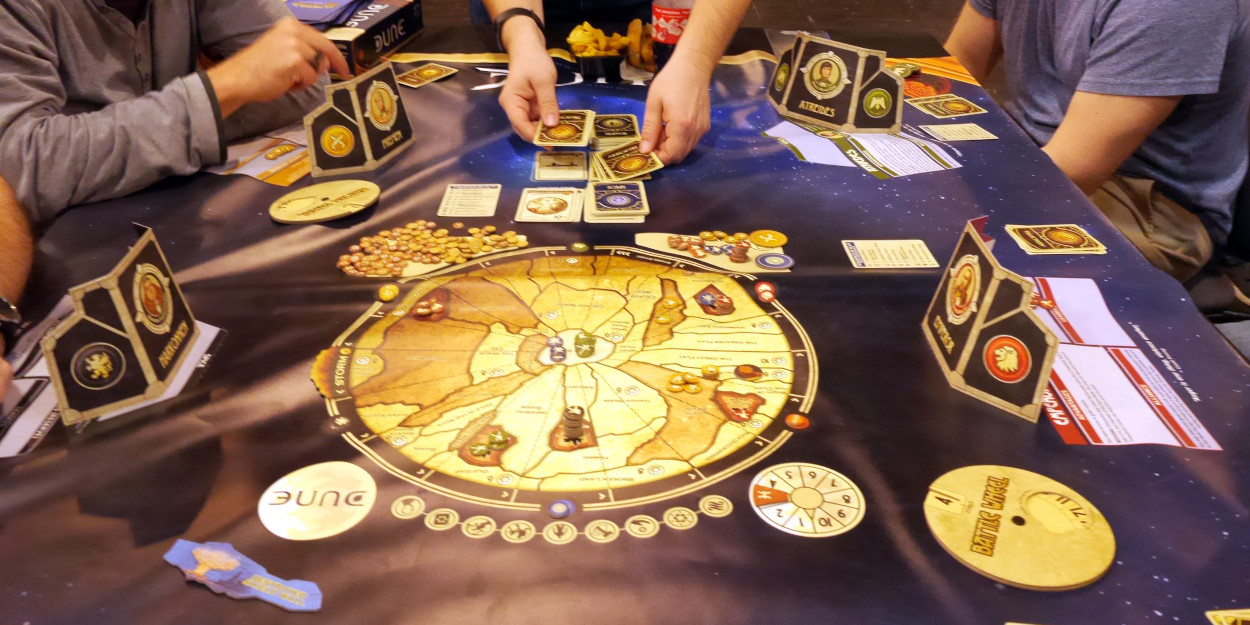 Remember to keep food and drinks at hand like the guy in the middle while wandering around the endless sandy dunes!

Our last gaming stop of the day was at the Queen Games booth in hall 3, the largest of the Essen halls. Hall 3 alone would be a big gaming convention anywhere else, but in Essen it is still only a part of the show. Nevertheless, it is the hall that gets the most action, and is usually packed with people, so getting from one end to the other can take quite a while. It’s often smarter to leave anything in hall 3 for the end of the day, when the crowd disperses a bit and heads inward towards the back halls.

The release we were looking for at the Queen Games booth is called Rune Stones, which is a fresh and light addition to the ever popular deck-building genre. The game features an innovative deck-building mechanic, which forces you to trash cards from your deck constantly, making the game play fast-evolving and giving it a feel of its own. The designer, Rüdiger Dorn, is well-known for games like Istanbul (Kennerspiel des Jahres 2014), Asante and Las Vegas.

On top of the deck-building, players also need to optimize the use of resources gained throughout the game, in order to add the coveted rune stones to their player board. By assembling these rune stones the players gain power points, which ultimately determine the winner of the game. A lighter deck-builder with some new mechanics is easy to bring out in many circumstances, so plenty of reasons to keep an eye out for this one! 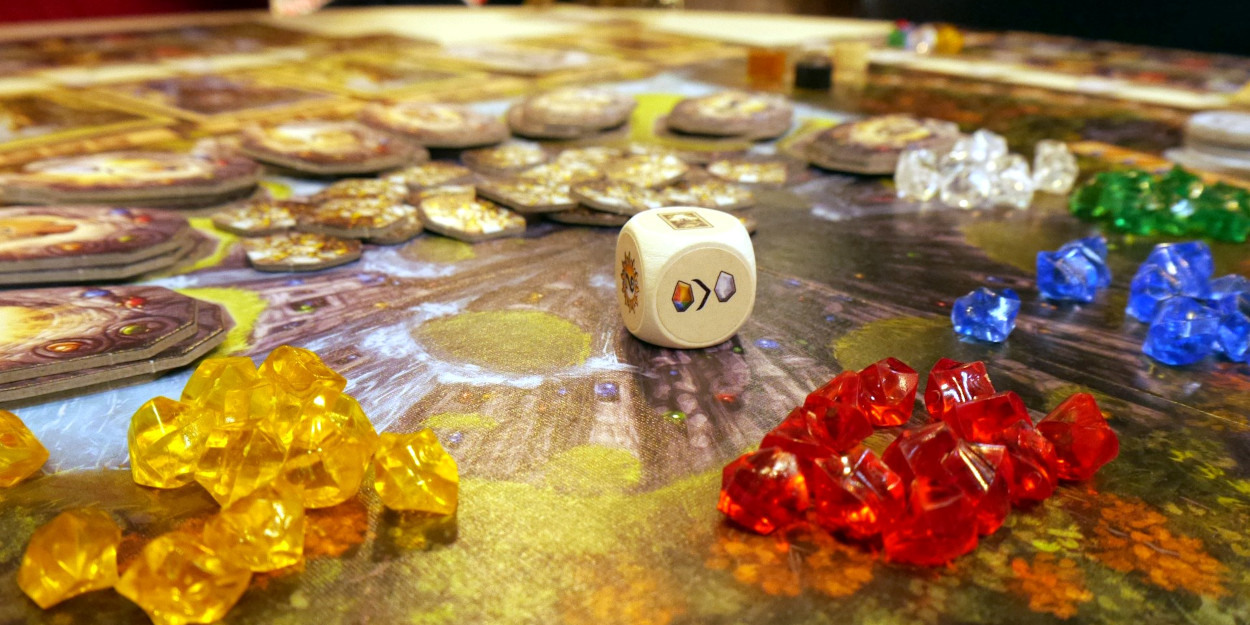 Shiny gems, forged artifacts and powerful Rune Stones... There are a lot of precious items involved in Rune Stones!

The last hour or so of the evening was spent mapping out any points of interest we might’ve missed while preparing for the trip, and it was during this time that we got a hot tip about a Soviet themed cooking game in one of the back halls. A chance to light-heartedly chuckle at our dear neighbors in the east should never be passed, so we made a note to check it out at some point during the weekend.

As our stomachs had not been properly fed during the day, we quickly headed out of the convention center for the nearby Sailor’s Pub, our favorite local food joint. Last year we spent Sunday night there joyfully celebrating a great weekend of sales at the convention (this year we did not have a booth of our own), and during that night I ordered no less than four Sunday steak specials for myself eating a kilo of steak. The local barkeep had not forgotten my shameless devouring, and was eager to clear the counter for our happy crew of Poromagia + Dized feat. acquaintances.

A jolly night was had with a delicious leberkäse burger, but wisely we called it a night after dinner. Having experienced hangovers in the packed halls of Spiel, I would definitely advise against drinking more than a few during Friday evenings! More games awaited to be discovered, and we were eager to start Saturday with some fresh energy, instead of cold sweat and a headache in a megapack of people.

END OF PART ONE